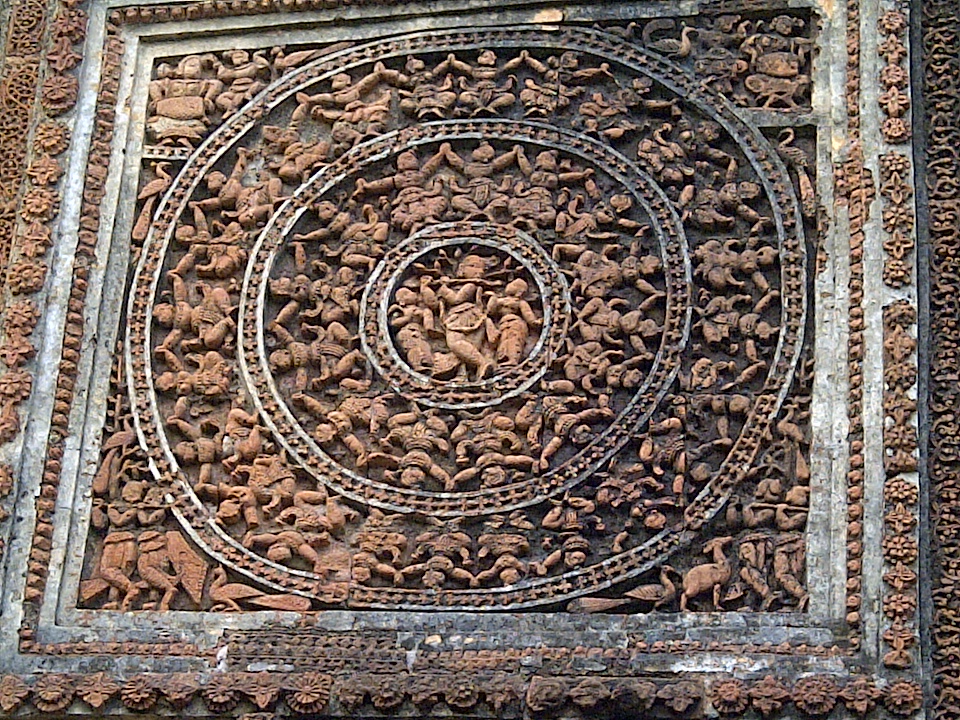 Risen from the earth, a manifestation of man’s proximity to and dependence on nature – the Terracotta (literally ‘baked earth’) workmanship is inherent to the red soil region of Bishnupur in the Bankura District of West Bengal.

The political importance of Bishnupur from the 16th to 19th century, as the capital of the Malla kings who were great patrons of the art, meant that the eyes of the nation as well as the Western world were focused on their lives and culture. The pink sandstone of Rajasthan, the white marble of the Taj Mahal, the intricate craftsmanship of the Muhgals set a kind of goal which they had to supersede in order to be noticed. The lack of marble or any other stone meant they had to turn to available materials. The red bricks born of their very earth was the natural choice. Buildings made out of these were decorated with baked clay figurines retelling the stories of the epics as well as depicting everyday life and its struggles. The exquisite workmanship together with the themes had an instant appeal.

As per the legend, the Malla dynasty that was established in 6th century AD in the Birbhum region of Bengal traced its origin to Rajputs in North India. Most of the terracotta temples were built between 16th to 18th Century and are the most ancient terracotta structures in the world.  These architecturally magnificent temples tell us the story of our cultural heritage. Some of the famous temples are Raas Manch, Jor Bangla, Shyam Raya and Madan Mohan which are unique in terms of architecture and beauty. The temples look splendid with intricate terracotta plaques that cover the entire brick structure of the temple. Since the Malla dynasty was Vashnavites, the followers of Vishnu, themes like Krishna Leela, Krishna Katha can be seen on the terracotta plaques. Ramayana, Mahabharata and other mythological stories also find their place on the plaques. The themes were greatly influenced by the Bhakti movement in 17th Century where stories of Sri Chaitanya Dev can be seen on the plaques as well. In some places one can also see Mughal and Chinese influence.

The Terracotta art form initially began as a kind of decoration for drab brick buildings, but the figures leapt out of their friezes and acquired a life of their own. Not only important buildings and temples, but even ordinary houses often had a skirting of terracotta panels.

The characters from these decorative panels were also made into individual three-dimensional figurines depicting men, women and animals. The Bankura Horse, produced in the Panchmura village of Bankura, is perhaps Bengal’s most famous Terracotta work. Due to the popularity of these figures, people from all over came to buy and take away with them a little part of the red earth of Bankura. This thus became a means of livelihood for not only the people of Bankura, but for many across Bengal. The appeal of these terracotta products gradually spread all over the world.

With increased marketing needs, there also arose the need for diversification and innovation. In today’s day and age, terracotta is no longer limited to figurines and decorative panels. It has extended to pots, pans, vases and even jewellery. Since the artists have to constantly innovate they also started experimenting with different colours. Creating a kind of variety some of the artwork is now given a black varnished finish but the appeal of those tall-necked, burnt-red pair of horses has remained undiminished.

6 thoughts on “Of the Earth – Bengal’s Terracotta”