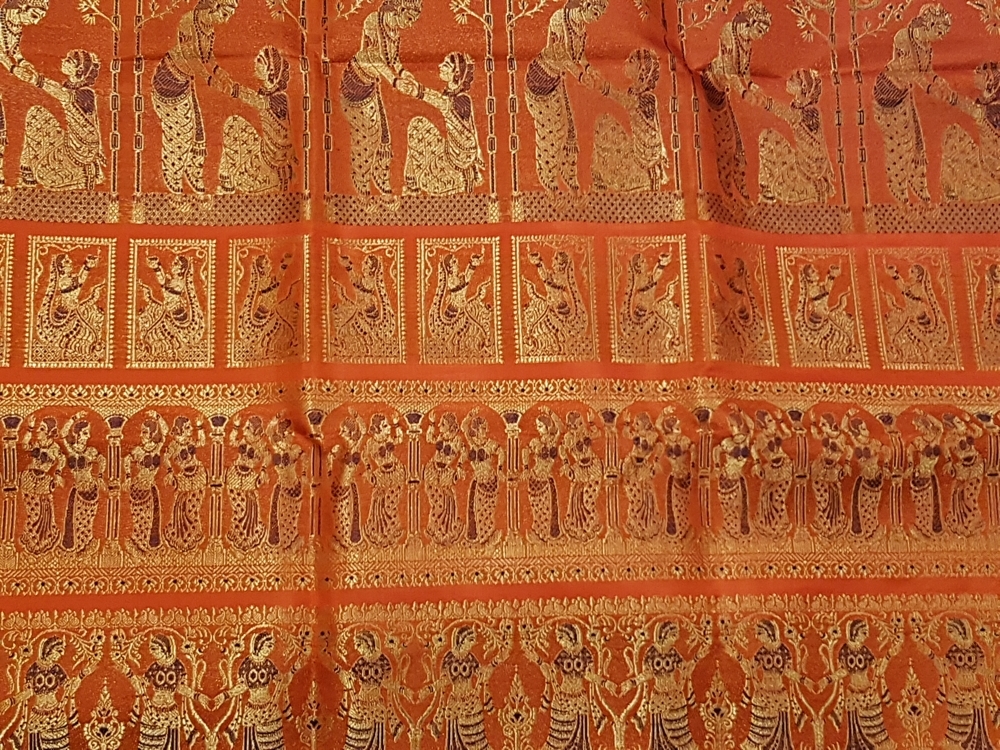 Baluchari sarees feature beautifully hand-woven mythological figures and stories on silk, which make them unique and distinctive. Since the weaving community mainly resides in Bishnupur area of West Bengal, they are also known as Bishnupuri sarees.

The history of this craft goes back to ‘Baluchar’, a small village in the Murshidabad district of Eighteenth century undivided Bengal, where one of the most elegant, gorgeous and royal looking Sarees of Bengal originated from. Bengal was then a thriving centre for producing the highest quality silk in India, the Murshidabadi silk, Tussar, and Raw silk being few among them.

The literal meaning of ‘Baluchar’ is an island or delta made up of sand. Baluchar village was on the banks of river Bhagirathi. It is said that the Nawab of Bengal, Murshid Quli Khan, brought this traditional form of weaving from Dhaka to Baluchar and patronized it. With the royal patronage the art flourished with a thriving community of weavers, and came to be known as the Baluchari style. Initially even the British patronized this weaving form. However, it is said that due to a heavy flood, the entire Baluchar village was destroyed. The weaver’s community migrated to Bishnupur, in the Bankura district of Bengal, and settled there.

Baluchari sarees stand out in their design with an aanchal with heavy brocade work. In earlier days often the brocade work depicted figurines from the then contemporary themes. The patronage of the royal families for many centuries reflected through the designs of Baluchari sarees. Along with mythological themes from Ramayana and Mahabharata, themes such as dancers in the royal court, Zamindar  with a  hukkah, or the Nawab riding a horse were common as well. Bishnupur had been the capital of the Malla dynasty of Bengal in the ancient times. The magnificent terracotta temples built in Bishnupur during the Malla reign also find their place on the Baluchari Sarees. Sometimes even European themes were found on Baluchari sarees. The themes were typically woven on the aanchal and border of the sarees. Baluchari was the weave worn by the royals and the elegant.

During the British era, this art form witnessed a decline due to non-patronage from the British administration that were only interested in raw silk and considered India as a big market for their own textile industry. Gradually Baluchari weaving almost disappeared from Bengal. With the death of the last renowned weaver Dubraj Das, the knowledge of this craft was almost lost.

However towards the second half of 20th Century, it was again revived with great effort by a few eminent artists. Shubho Thakur (from Tagore family) and an extremely skilled artist and weaver called Akshay Das were instrumental in reviving this craft. The family collection of the Tagore family helped in reviving the designs to a great extent.

Today the craft of Baluchari weaving is being practiced and preserved by the weaver community settled in Bishnupur and Murshidabad region of West Bengal. Though the style and soul of the original craft have been revived and preserved, certain creative innovations have been done in the modern day weaving. There has been the introduction of Swarnachari, where instead of silk threads, only zari threads are used for weaving the motifs.

A piece of Baluchari is not only a piece of silk but also a mythological story or a piece of history reflecting the social practices from a particular era. It is a craft that also documents history.

Check out some exclusive collections at www.arteastic.in