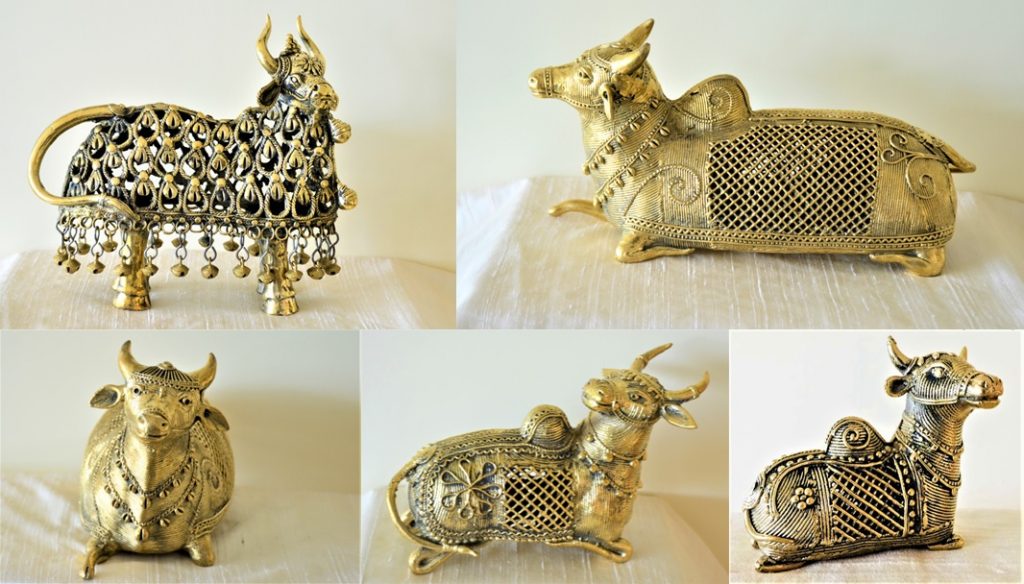 Nandi, the Bull shaped disciple of Lord Shiva is the head of Ganas and is a symbol of strength and virility. The Vayu Purana states that Nandi is the son of Kasyapa and Surabhi. Other Vedic texts point to Nandi being born as a wish-fulfilment boon given to Sage Shilada for an immortal son by Lord Shiva. Nandi was also a great devotee of Lord Shiva and legend says that after a long and arduous penance he was appointed as the Head of the Ganas (attendants)and his personal vahana (vehicle) by Lord Shiva. Mythology also talks of the Samudra Manthan, wherein the Gods and Asuras churned the ocean using Vasuki (King of snakes) as the rope. This resulted in halahal (poison) spewing out from Vasuki which would have harmed all life. Lord Shiva drank this poison but Goddess Parvati constricted his throat so the poison would not enter his body and the poison settled in his throat. Some of the halahal spilled and Nandi drank the spilled poison and survived due to Lord Shiva’s protection.

It is also said that Lord Shiva (who is primarily a mendicant) used to get some irritation in his throat due to the poison which disturbed him during meditation. He asked Nandi to blow air onto his throat to soothe him and thus Nandi is always found in front of Lord Shiva in Shiva temples.

Philosophically, it is often stated that Nandi is the Jeeva (self) while the Lord is the Paramatman. The positioning of Nandi in front of the Shiva lingam therefore goads the Jeeva to be always focused on the Paramatman.

The worship of Nandi and Lord Shiva can be traced back to the Indus Valley civilisation times, with many Bull seals found in Mohenjodaro and Harappa and could be the origin of the bull or Nandi worship.

Mythic tales aside, the symbolism of Nandi as the giver of strength and virility, of loyalty and pure devotion, makes it a wonderful addition to any home, be it in the puja room or just as an item of decor. We at Arteastic bring you a collection of beautiful Nandi statuettes in Dokra thatwill physically embellish your home and symbolically give you and your abode strength.