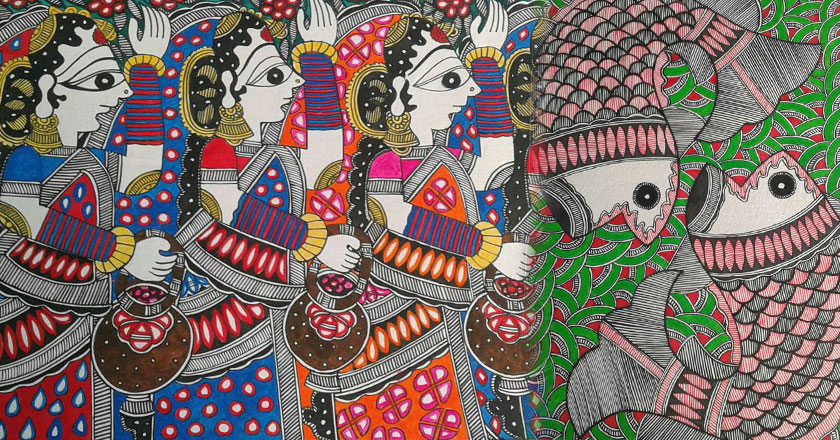 A bright yellow saree with lots of beautiful fishes in different colours and hues painted on it – that is my earliest recollection of a Madhubani painting. As a six-year-old girl, I did not understand that was an art form followed by Madhubani painters. I also remember thinking that despite being a Malayalee girl living near the coast of the Arabian Sea, I had never seen fishes so vibrant and beautiful. My mother also had no answers, except that she had received that saree as a gift from a friend who stayed in Patna. It was much later, when I was in college, that I learnt the saree was painted in what was known as the Madhubani or Mithila style of painting, indigenous to the Mithila region (modern day Bihar).

As Old As Time

The name Mithila conjures up imageries of the land of Janaka, inseparably related to the epic Ramayana in the Hindu mythology. Legend has it that King Janaka ordered some paintings to be made to celebrate the union of Rama with Sita. These paintings closely resemble the Madhubani or the Mithila style of painting that we see today. In contemporary times, this style of painting can be traced to the Madhubani district in Bihar, literally meaning ‘a forest of honey’, where women spent a lot of time making these paintings on the walls of their homes. Mainly attributed to the upper caste in the beginning, this was later taken up by women across all castes. Some men subsequently joined in, but the art form has been greatly dominated by the womenfolk of this region. Today, this art form has also been accorded the GI status, specific to this region.

The women used their keen sense of beauty to create evocative paintings of gods and goddesses, animals and characters from mythology, using natural dyes and pigments and painted with the help of twigs, fingers and matchsticks. The paintings today have evolved a lot from the original wall sketches, and for a good reason. As the word spread about the ethereal beauty of these paintings, Madhubani began attracting customers. During times of drought, this became a lucrative proposition, a steady source of income for the women. Only Brahmin women were allowed to practice this art in its nascent stages, later, however, Kayastha women also developed their own style. The caste divide perhaps arose from the fact that the women of the lower castes were away helping their husbands in the fields, and hence had no time for art and craft!

Amongst the Brahmin women, Sita Devi, Bawa Devi and Sarita Devi were some of the pioneering artistes. A typical feature of the Brahmin style of painting was the widespread use of bright colours and an absence of shade. Gods and goddesses were given a place of prominence in them, considering their importance for the Brahmins. On the other hand, Ganga Devi, Pushpa Kumari, Karpoori Devi, Mahasundari Devi and Godawari Dutta are prominent amongst the Kayastha women. Fine detailing of the village, festivals and religious scenes were a speciality of these ladies. Lately, women from all castes have come forward and started engaging themselves in this gorgeous art form. Jamuna Devi and Lalita Devi are two well-known Harijan painters.

In recent times, Karpoori Devi, Jamuna Devi and Ganga Devi have garnered immense fame for their portrayal of real life events, along with ancient stories. Ganga Devi’s exquisite depiction of her journey from Bihar to the All India Institute of Medical Sciences, New Delhi in the quest of treating cancer has become famous worldwide.

Like most other art forms, the art is highly commercialized today, in the quest to gather name and fame, endangering the very aesthetic essence of the art. The designs and the colours are now decided by the buyer, and this harms the indigenous nature of the art form. Many people today take training from metropolitan cities from people who themselves do not understand the soul of the beautiful art of Madhubani painting. The colour combinations, the technique of getting these colours from nature etc are lost on them.

There is a migration of the population from the villages to the cities in search of greener pastures. This leads to the dilution of traditional ways and means of painting using natural and locally available colours. The authenticity and ethnicity of an art is hence lost during the transition from the rural to the urban climes.

There is a ray of sunshine in this chaotic scramble to commercialise though. Certain NGOs, along with organizations run by the Government, are making earnest efforts to retain the originality of this art form and help the traditional painters retain their livelihood. Check out the amazing array of Madhubani paintings created by painters for whom this is not just a craft, but a way of life.