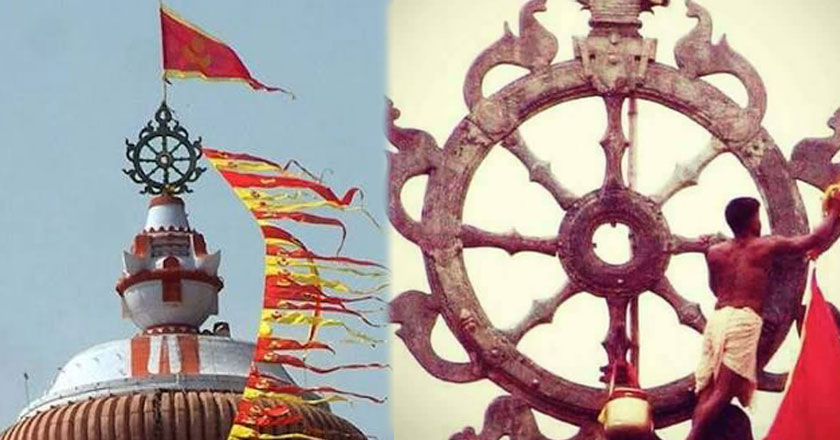 From the era of Panchajanya to today

On a lazy winter afternoon, we headed from Bhubaneswar towards Puri. Puri didn’t figure in our travel itinerary initially. It was a sudden urge to make a quick visit to the Jagannath Temple in Puri during our 3-day business trip to Bhubaneswar. Since my family has a strong connection with Odisha, paying a visit to the Jagannath Temple, before embarking on any important journey of life, seemed natural.

As we reached Puri in the late afternoon and made our way towards the temple hurriedly on foot through the bada-danda (the wide main road leading to the temple, literally meaning the big courtyard), I observed several big groups of pilgrims from all over the country hastening to enter the temple. There was a big group of men and women from Rajasthan, another from Bihar and yet another from Maharashtra. Their deep devotion in Lord Jagannath had brought them to Puri, which is one of the chaar-dham (four auspicious pilgrimages) for Hindus.

After praying to the Lord and paying our respect to several other deities present inside the temple yard, we headed towards the sea beach. The Puri sea-beach is one of the most well-known beaches of India due to various reasons. The deep blue water of the Bay-of-Bengal was welcoming, with the setting sun turning part of the ocean crimson red.

As we walked on the beach, among the cacophony of tourists, fishermen, divers and horse-riders, we heard the unmistakable sounds of a conch shell being blown. All other sound seemed to fade away and following the piercing sound, we soon found ourselves amidst a few sea-shell vendors selling various types of sea-shells caught by the fishermen from the sea. Displayed in that array were some extremely rare and precious conch-shells. Puri is one of the few beaches where big sized conch shells (Shankha) are available. I didn’t lose the opportunity to pick up some rare and beautiful pieces like a Moti Shankha, a Ganesh Shankha and a Dakshinavarti Shankha and add to my collection. After coming back home, I was tempted to learn more about this beautiful creation of Mother Nature.

Shankha (The Conch Shell) – yet another flawless creation

Shankha is a wonderful gift of nature to mankind. It is blown to produce heavy and distinctive sound, considered to be very auspicious and soul awakening. Hindu religion recognizes its intrinsic values and made it an integral part of its rites and rituals. The blowing of Shankha marks the beginning of any sacred ceremony. This is actually an ancient practice, since the epic age. Myth and Science have given ample reasons to signify as well as justify the popular use of Shankha.

Shankha is obtained from a sea-snail “Turbinella Pyrum”, mostly found in the Indian Ocean. The surface of the sea-snail is strong, hard and shiny. It is found in various shapes and sizes. Oblong and conical shaped are mostly in use.

Based on its direction of coiling the Shankha has mainly two varieties- “Dakshinavarta” and “Vamavarta”, attributing to different virtue and structure. Dakshinavarta, a rare jewel, is associated with Lord-Vishnu, and symbolizes the infinite space. Whereas, Vamavarta, represents the reversal laws of nature, and is thus linked to Lord Shiva.

Its eternal presence in prayer

Hinduism believes “Shankha” as a giver of fame, longevity and prosperity. The Shankha Dhwani(sound) symbolizes “Oum” the first word of Gayatri Mantra. Shankha is the abode of Goddess Laxmi and Lord Vishnu, believes Hinduism. Thus for ritual purification, un-holed Shankha is use to bathe the deities. Water led through Shankha is considered as a very holy bath, and is still practised. This wind instrument is made by drilling a hole near the tip of the apex to produce that heavy sound (Shankha-naada). Krishna resounded his Shankha named “Panchajanya” to declare ‘Mahabharata’ war. Buddhism believes the elegant, deep, melodious, interpenetrating and pervasive sound of Shankha awakens a disciple from the deep slumber of ignorance. Hindu gods and goddesses hold Shankha in their hands for dual purpose, one to blow, as trumpet(Shankha dhwani), other to use as a weapon (Ayuddha).

Hinduism believes that Shankha dhwani eradicates ill spirits and germs and creates a positive vibration and divine atmosphere. Without the sacred sound, no religious rites and rituals are complete.

It is also used as Ayurvedic medicine. Shankhabhasma (ash) is prepared by soaking the shell in lime juice and calcinating in a covered crucible. This contains calcium, iron and magnesium along with antacid and digestive properties.‘Blowing into the Shankha’ with rhythm, one can control the breathing system, which is the first step of learning Yoga. The vibration thus created, helps one to de-stress and possess a strong and healthy mind.

Puri sea beach, home to some of the rare conch shells

The Conch shell and Art

Thus assimilation of the multipurpose use of Shankha is deep rooted in Indian culture, which is well reflected in every form of art. Be it iconography, architecture, painting, printing patterns or be it regional dance form, Shankha has touched every artistic expression.

As I stood that evening, holding this virtuous and aesthetic symbol in my hand, I could not help but reflect on the entrepreneurial journey I was about to embark upon and the significance of its symbolism came home to me. I was beginning my journey at Puri, also known as “Shankha-kshetra”. And I said to myself, Shubham…let the journey be infused with goodness…

7 thoughts on “Shankha : The Conch Shell”