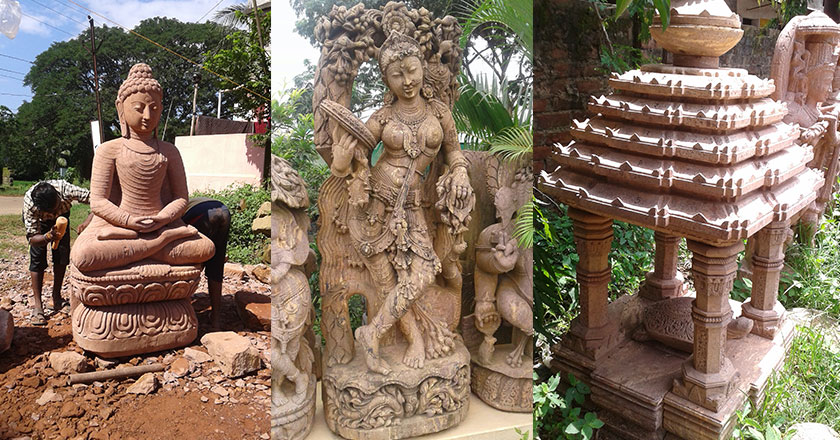 There is a temple around every bend of the road, and every temple tells a story – this is how I was introduced to the spiritual and architectural wonders of Odisha, a state long known for its affinity to peace and serenity. Its rich cultural heritage and legacy of architectural supremacy has been captured in stone over and over again; countless ancient temples are a testimony to the sophistication, brilliance and finesse of the art of stone carving.

The art of stone carving is an ancient practice dating back to the 13th century when Odisha was ruled by different dynasties, and that diversity of culture is reflected in the craft. Intricate sculpting and exquisite carvings were done on sandstone, soapstone, serpentinite, markana, marble and granite. In fact, the sculptors were at ease with any and every stone but preferred to carve their masterpieces from soft white soapstone khadipathara or the slightly greenish variant kochilapathara.

This traditional style of sculpting has been passed down through generations. Even today, sculptors bring stones into life by using age-old minimalistic tools like a hammer and chisel. The desired figure is sketched on stone and then carved out by removing unwanted portions. As each piece is created by hand, each piece is different: unique and exclusive.

The art of stone carving is probably most eye-catching in the rock-cut sculptures of various temples of Odisha. The intricate sculpting style is on proud display in the Sun Temple at Konark, an ode to architectural excellence. Designed in the form of an intricately detailed chariot mounted on 24 wheels and drawn by 7 horses, it is a visual delight and an artistic masterpiece.

Not far from Konark, Puri – the home of Lord Jagannath, is also home to hundreds of such temples, all highly detailed, depicting the lives of Gods and their consorts. Bhubaneswar, also called the temple city, literally has a temple in every lane. While Lingaraj and Kedara Gouri are the more famous temples, Chausathi Yogini is one that celebrates the sensuousness of life in all its glory. The outstanding architectural brilliance shines through every nook and corner of the structure.

Konark, Puri and Bhubaneswar together constitute the golden triangle of Odisha, where the language of stone surpasses the language of mankind and hordes of pilgrims flock to the sandstone temples to catch a glimpse of Odisha’s glorious past.

As the temples of yore were vandalised by invaders of different religions again and again, the protectors of history had an ace up their sleeves. They turned to stone carving as a craft, not as a form of practising religion. Whereas stone carving was originally an ancient tradition of sculpting stone into pieces of art for temples, the wise sculptors decided to turn it into creating pieces of art which were just that – art.

An artisan at work

So today, you may not be able to see stone being carved into icons of spirituality, but you can enjoy the sight of craftsmen skilfully working on their stone to create exquisite works of art. Replicas of the most famous temples of Odisha, devadasis (dancers), swarasundaris (damsels playing musical instruments), the Konark wheel, horses, elephants and lions! Moreover, over time craftsmen have embraced modernity in their designs. Home décor items like candle stands, book ends, vases and kitchen utensils are also being carved to perfection, from the humble sandstone.

The ancient practice of stone carving has undergone a huge transformation with the passage of time, glorifying the rich cultural heritage of Odisha and preserving the old age traditions, while embracing the evolution in designs and preferences. Here is your opportunity to discover this unlimited range of antiquity carved in stone. Visit today and feast your eyes on the classic rock-cut sculptures and figurines waiting to be caressed by you.