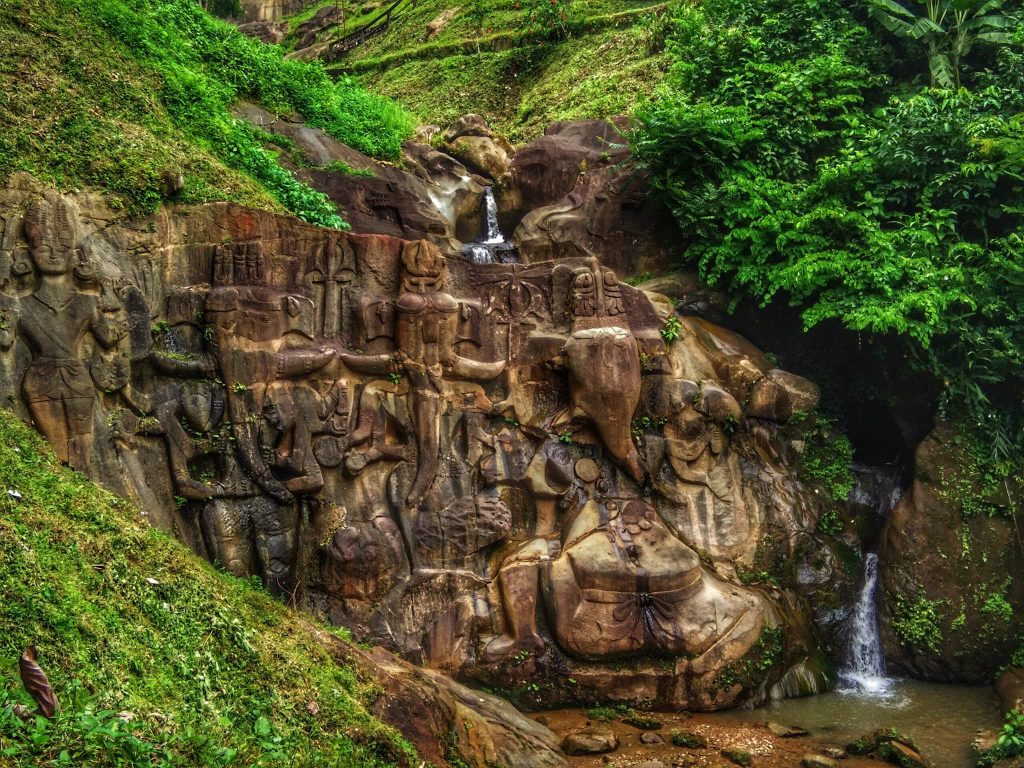 A ten-year-old girl was struggling to catch up with her father, an army man, walking between dense foliage through hand cut rock steps. She was afraid she would be turned into stone if they didn’t reach the summit before sunrise, as local folklore had it.The gentle stream to keep her company was the only path she knew she had to follow, as there were no railings or arrows to show her the way then.

Her eyes suddenly fell on a huge rock sculpture of Ganesha and soon a multitude of sculptures of various Gods and Godesses were revealed to her astonished eyes in a matter of moments. More than three decades have passed since, and the little girl has grown and seen the world…yet she has never come across such a fine and numerous collection of sculptures in her life. The huge Shaivaite sculptures of all the Gods and Goddesses she discovered that day established her belief in the strength of her culture and people forever.

Unakoti, meaning ‘One less than a crore’, is one of the best kept secrets of Tripura, and is predominantly Bas-Relief sculptures of shallow depth made upon a single rock or stone. Our culture is predominantly nature oriented and absolutely unique to my state, Tripura; But the intricacy and details of all the carvings are second to none.

Even though nature is bounteous in this serene and beautiful place, it still is amazing that such a huge collection of sculptures abound in such a remote and difficult place. This has led to much folklore about the sculptures of Unakoti. One says that Lord Shiva and all other Gods and Goddesses, all of a crore, were travelling to Kashi. Seeing this beautiful place, they rested for the night. Early morning, they were still sleeping when Shiva wanted to start his travel. So they were cursed to stone and only Lord Shiva continued on his journey.

The tribals believe a sculptor named Kallu Kumar, a great devotee of Parvati, wanted to go to Kailash. Lord Shiva accepted under the condition that he finish a crore of the sculptures in a single night. Sadly at daybreak, he fell short of the divine target by one solitary sculpture, and so Lord Shiva left him, and returned to Kailash .

Among the rock-carved images, the most notable are the Shiva head (known as Unakotiswara Kaal Bhairava) , Ganesha, Durga on lion and Nandi bulls. The sizes of these rock-cuts are gigantic.

The magnificent rock carving surrounded by the pristine nature with jungles and waterfalls make Unakoti  a place worth exploring. Arteastic thanks Basudha Modak  for writing this piece for their blog.

Basudha Modak is a Social Change Maker and the Founder of a Community Support Group called ‘Storm in a tea cup’. Originally from Tripura , currently she lives in Johannesburg, South Africa.

One thought on “Unakoti – One less than a crore : The best kept secret of Tripura”